Here's a collection of some of our favorite Missouri River books.

It's by no means complete and we'd love to hear your suggestions. If you have a favorite Missouri River book or category of books you think belongs on our shelf, please email Steve with your ideas.

Please check out your local booksellers to see if they can help you find whatever books you are looking for. We have to support what we want to survive.

Here are the categories we have so far.

“The Osages – Children of the Middle Waters”

by John Joseph Mathews (1961 – 826 pp)-  A poetic but careful and complete retelling of the Osage cosmology by an Osage who was a generation away from the Oklahoma Osage reservation, but returned to collect and publish oral histories. Also, check out "A History of the Osage People" by Louis Burns (2004 - 632pp) 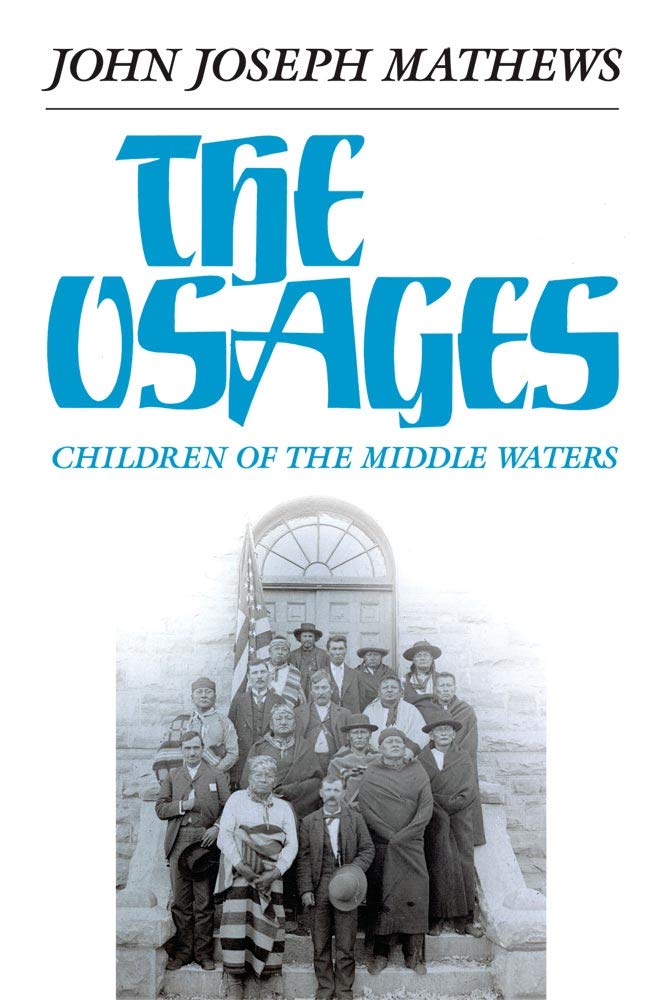 "Dammed Indians Revisited: The Continuing History of the Pick-Sloan Plan and the Missouri River Sioux"

by Michael L. Lawson (1982, 2009 – 396 pp) – The most comprehensive history of how the Missouri River reservoir system was designed to displace native tribes and villages, and the inhumane way this policy was enacted. 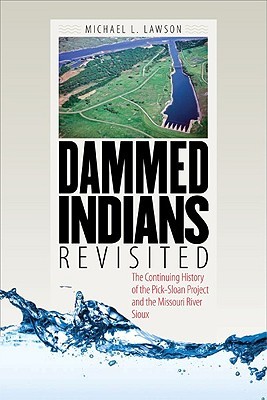 Encounters at the Heart of the World: A History of the Mandan People

by Elizabeth A Fenn (2014 – 456 pp) – A fascinating look at these unique river people whose extensive villages were the heart of ancient agriculture in today's North Dakota.

by Melvin R. Gilmore (1914 – 109 pp) – The Great Plains' first enthobotany. The use of a multitude of plants give a unique window into the history of our river valley. You can download a PDF here. 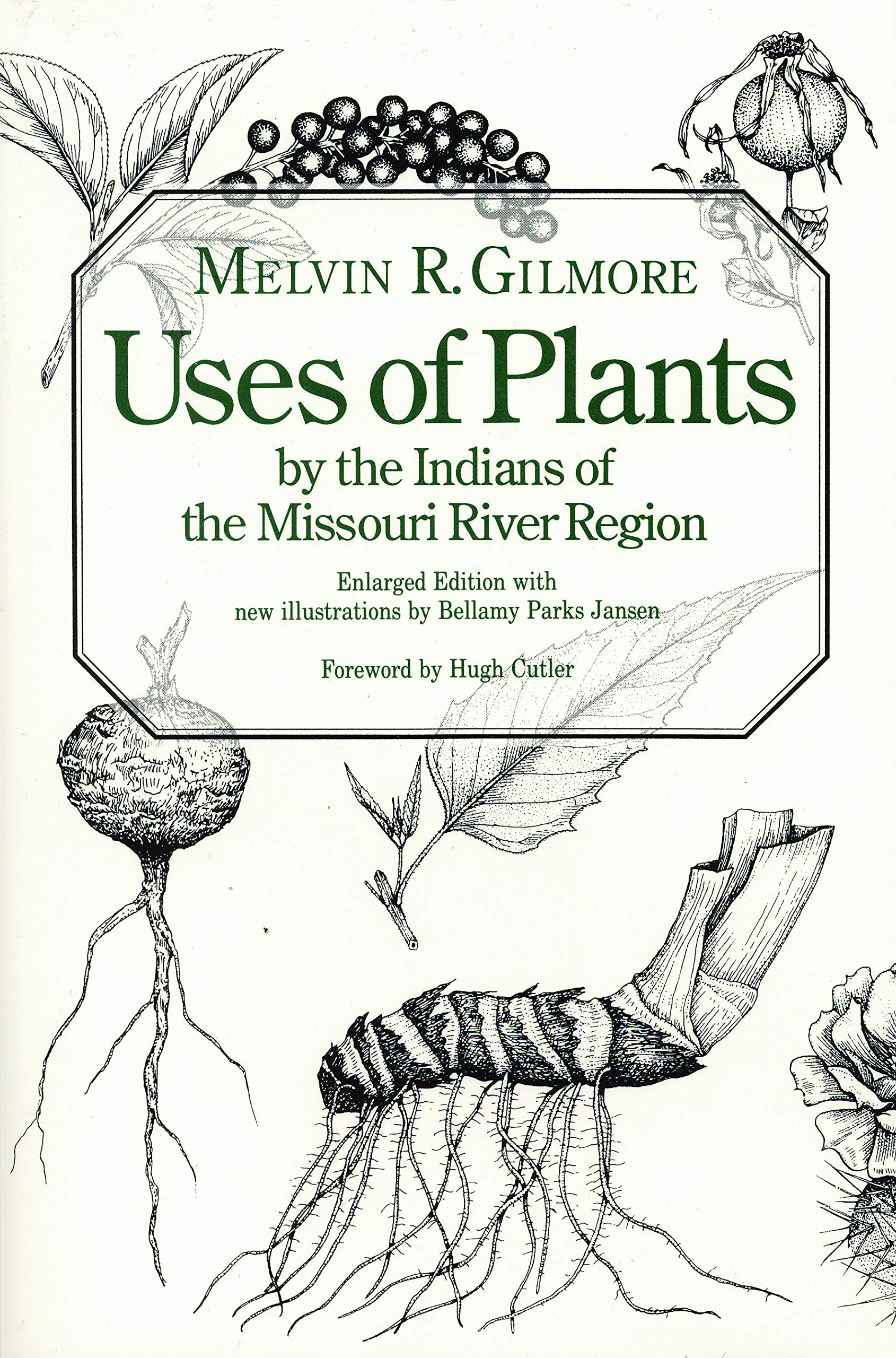 by Michael Dickey (2011 – 168 pp) – One of very few publications collecting prehistory, oral history and recorded history of this embattled tribe. To watch a presentation by Michael Dickey about the Missouria, check out our Big Muddy Speaker Series video.

by Timothy R. Pauketat (2009 – 194 pp) – Recent discoveries about North America’s greatest city and its impact on the culture of a continent. 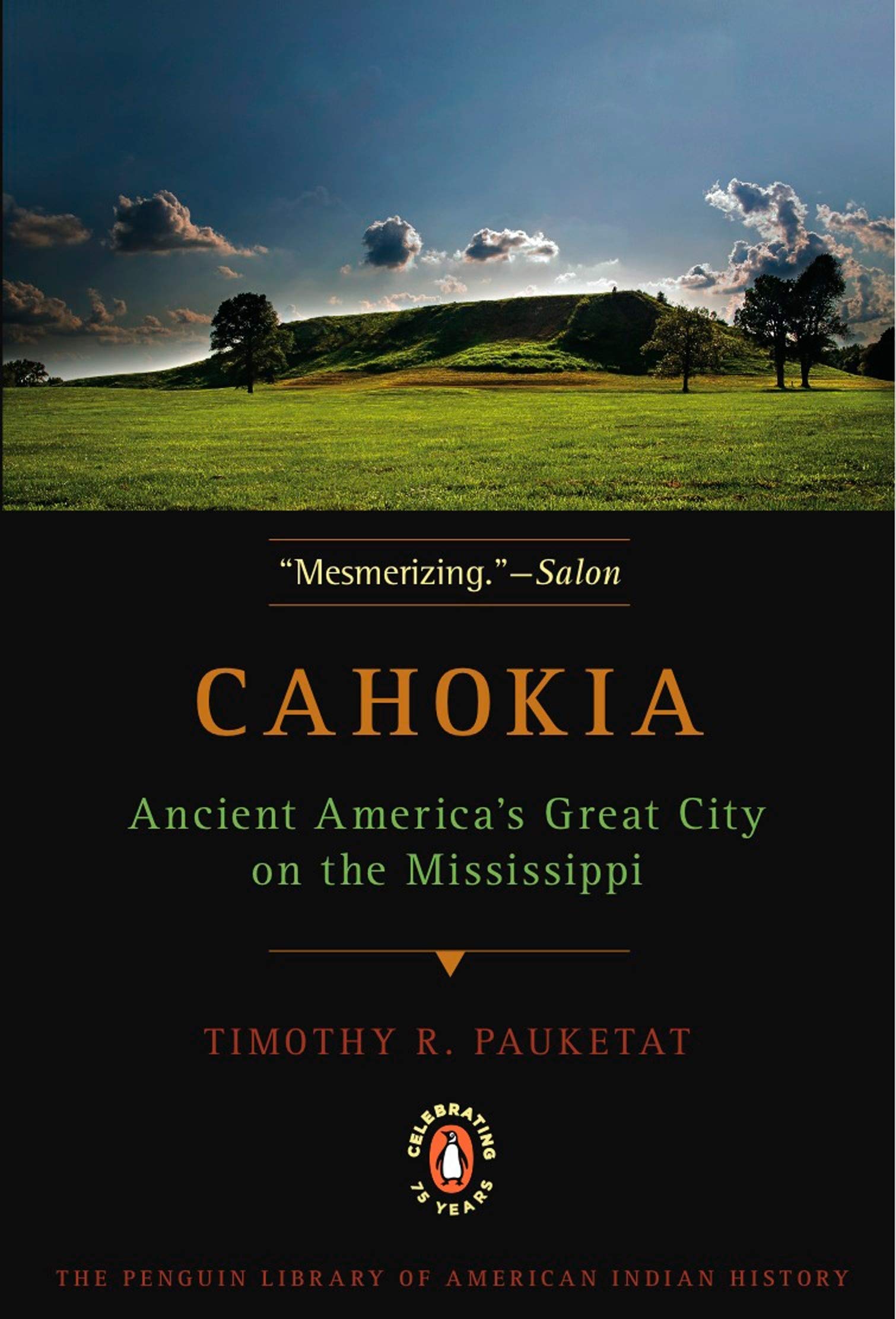 by Cecil R. Griffith (1974 - 96pp) – A fascinating collection of stories describing towns and landmarks on the Lower Missouri River. 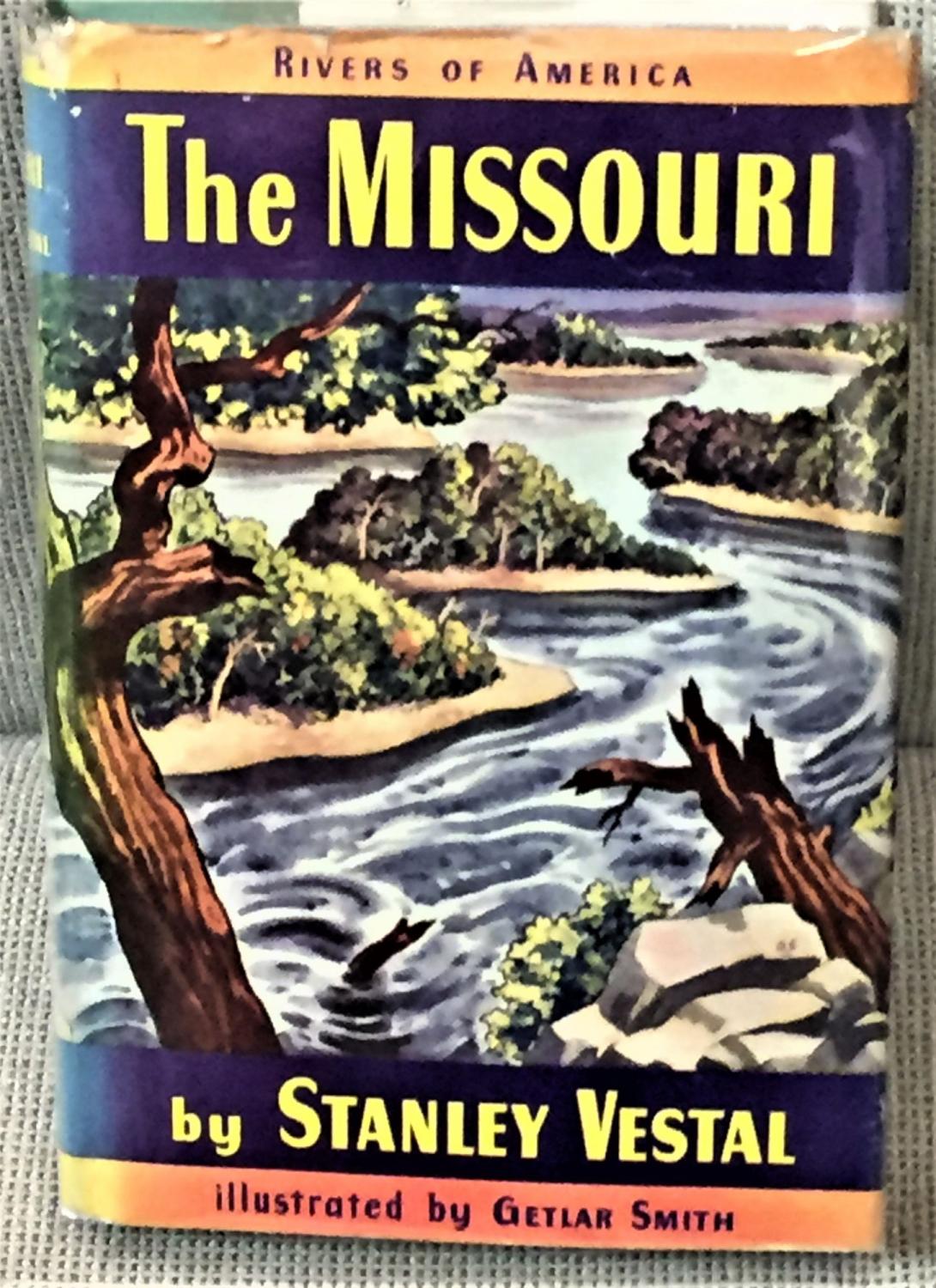 edited by Dan Burkhardt. (2015 – 192 pp) - The Missouri River valley comes alive with the stories of the people that live, work in and explore the region.

"Growing Up With The River: Nine Generations On The Missouri"

by Dan & Connie Burkhardt. Art by Bryan Haynes. (2016) – The story of the final 100 miles of the Missouri River is told through the eyes of children that lived with the river. This book was also the inspiration of the film "Rivertowns", which you can watch here. 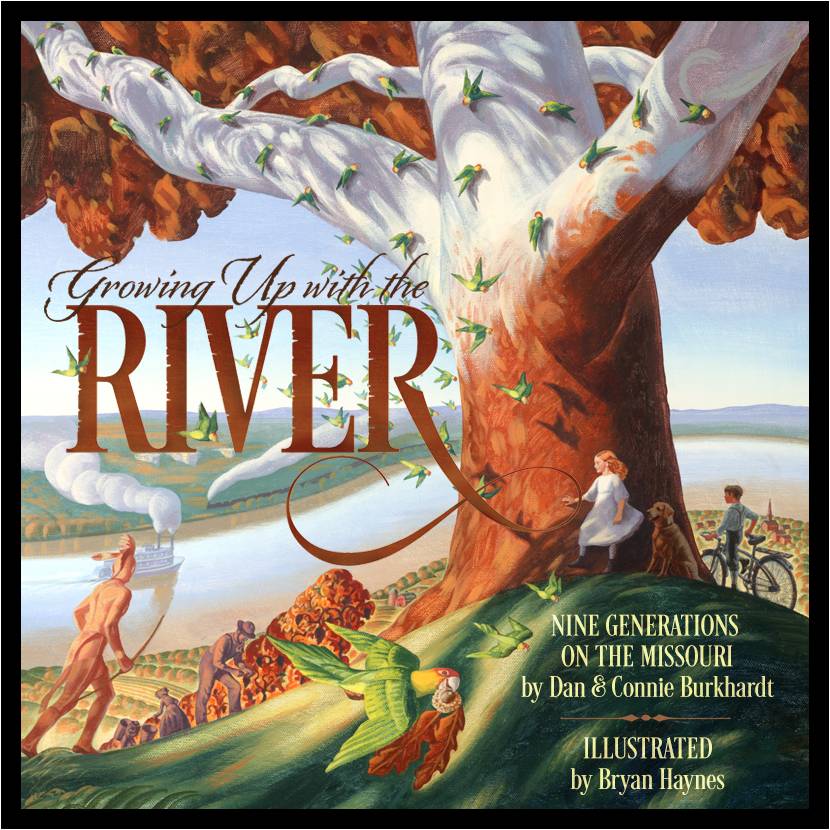 by Bill Lambrecht (2005 – 324 pp) – A fun and eye-opening travelogue and political discourse on the many modern visions of how the Missouri River should be managed.

"Unruly River – Two Centuries of Change Along the Missouri River"

by Robert Kelley Schneiders (1999 – 315 pp) – An in-depth look at the political and social choices that drove the domination of the Missouri River. This is probably the most complete book for understanding the history of Missouri River management. 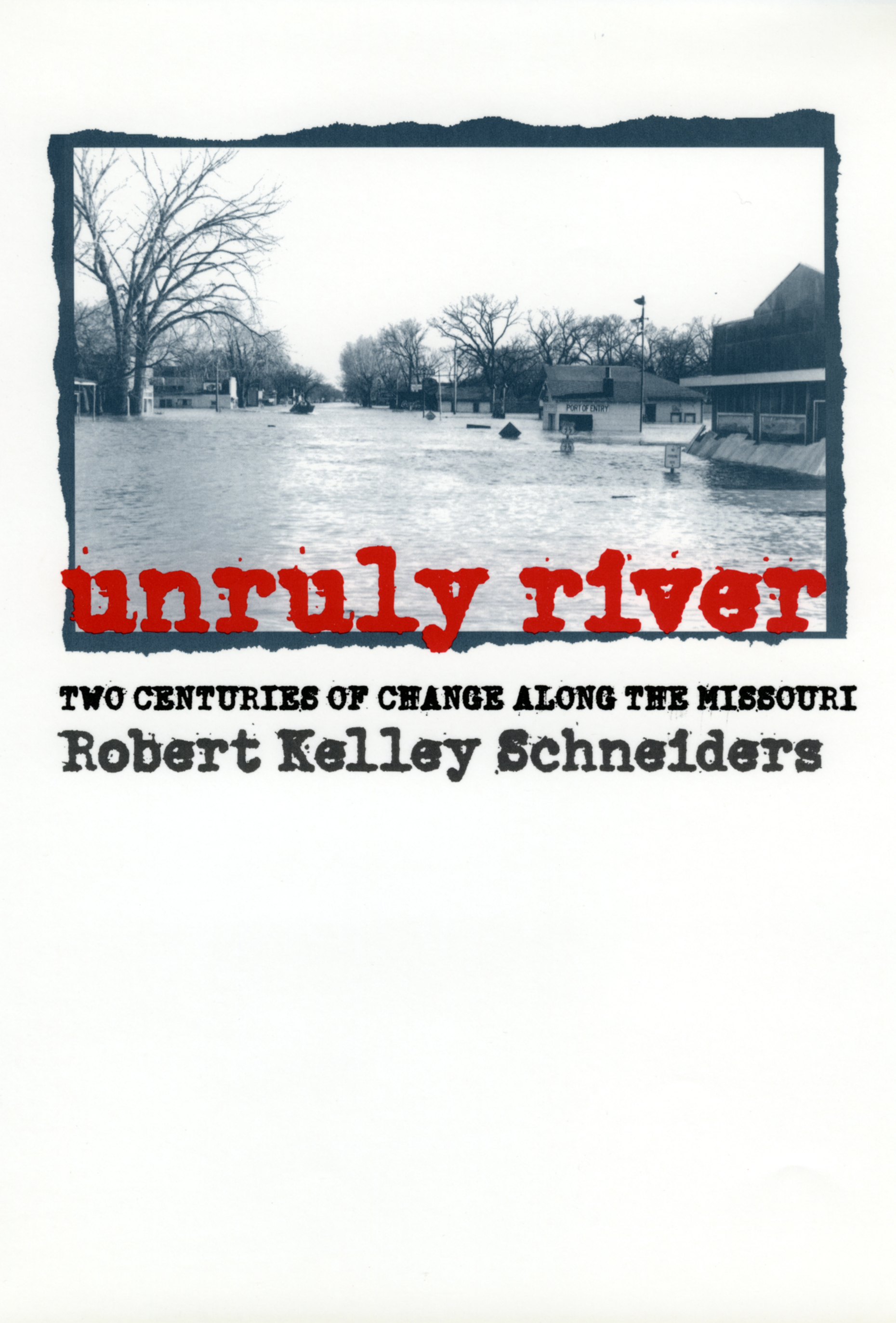 by John M. Barry (1998 - 528pp) - A classic in American history. Focused more on the Mississippi River, but this is an essential volume for understanding the history of river management in the U.S. so we can hopefully learn from the mistakes of the past. The book is much broader than just river management, really painting a portrait for how important this flood was in the overall history of the nation.

“River of Promise, River of Peril: The Politics of Managing the Missouri River 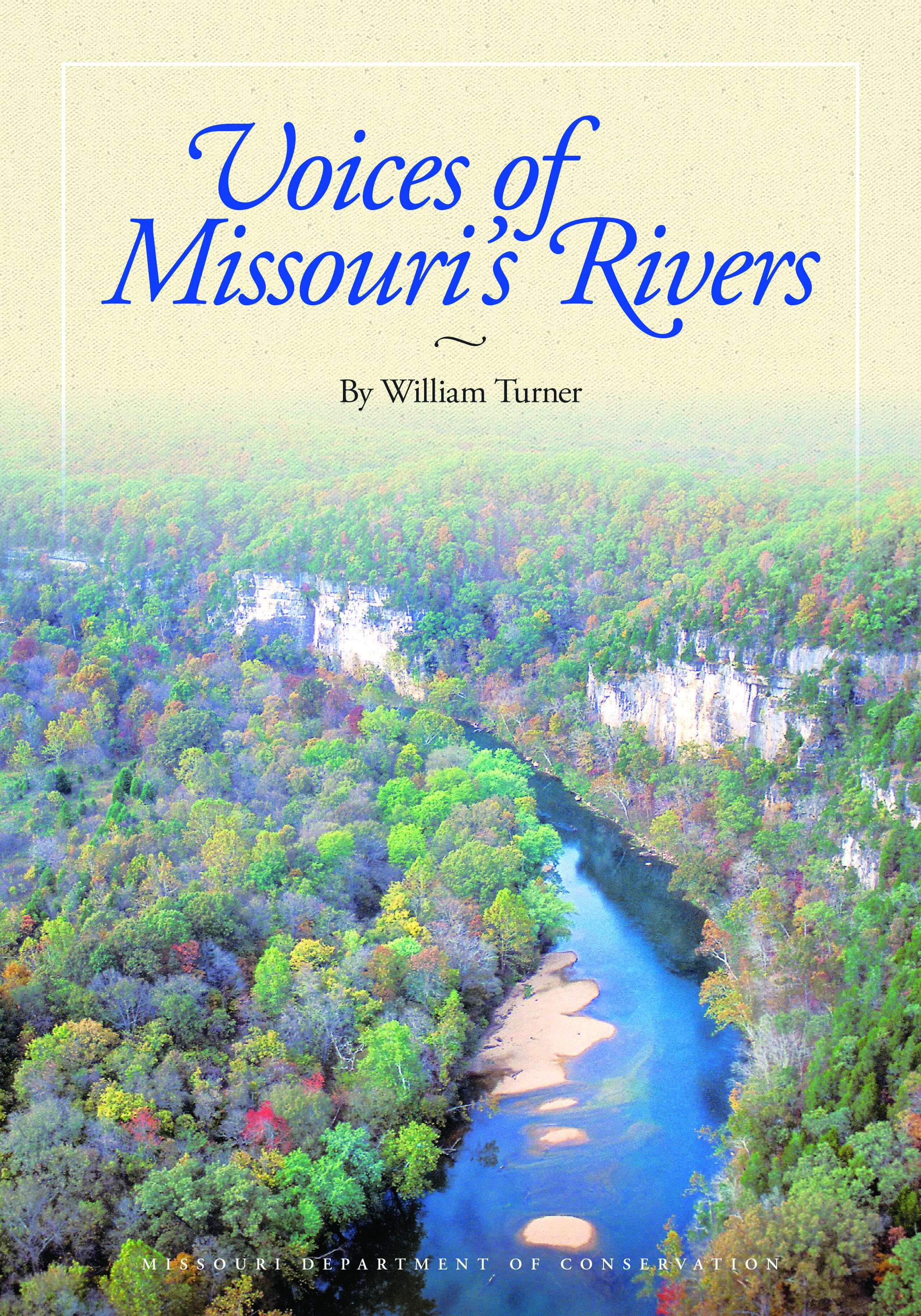 by Joseph Mills Hanson (1909 – 457 pp) – A classic of western exploration about a singular figure in Missouri River history.   Read on Google Books 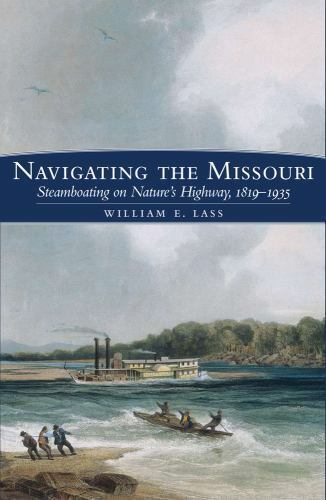 “Black Life on the Mississippi: Slaves, Free Blacks, and the Western Steamboat World”

By Thomas C. Buchanan (2006 - 272pp) - African-Americans have been both crucial creators and oppressed minority in Great Rivers culture. This book explores the hidden history of how the southern and Midwestern river economies depended on black lives. 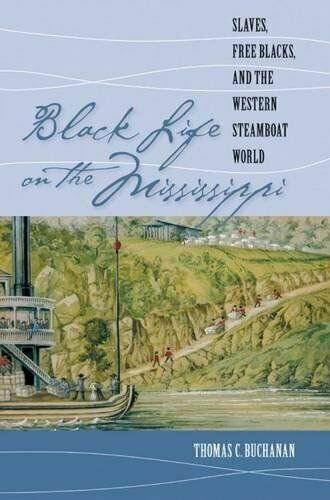 by Hiram Martin Chittenden (1903 – 277pp) – A wide -ranging and detailed history of steamboating through the lens of the famous Missouri River steamboat pilot.  OR view the archive of Vol. 1 here.

by Greg Hawley (1998 – 224 pp) – An amazing story of a family obsessed and dedicated enough to excavate and preserve the contents of a steamboat buried 40 feet below a cornfield. In case you haven't been, you HAVE to visit the Hawley's Arabia Museum located in the River Market district of downtown Kansas City. 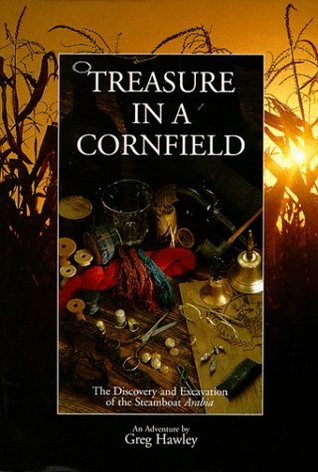 by Robert Kelley Schneiders (2003 – 374 pp) – How bison formed the spiritual and ecological heart of the Upper Missouri and Yellowstone Rivers, and what that missing heart means today.

“Locust: The Devastating Rise and Mysterious Disappearance of the Insect that Shaped the American Frontier”

by Jeffrey Lockwood (2000 – 320pp) – The Missouri River watershed was the stage for this epic natural drama that had a sudden curtain. How we accidentally caused the extinction of this pioneer nemesis. 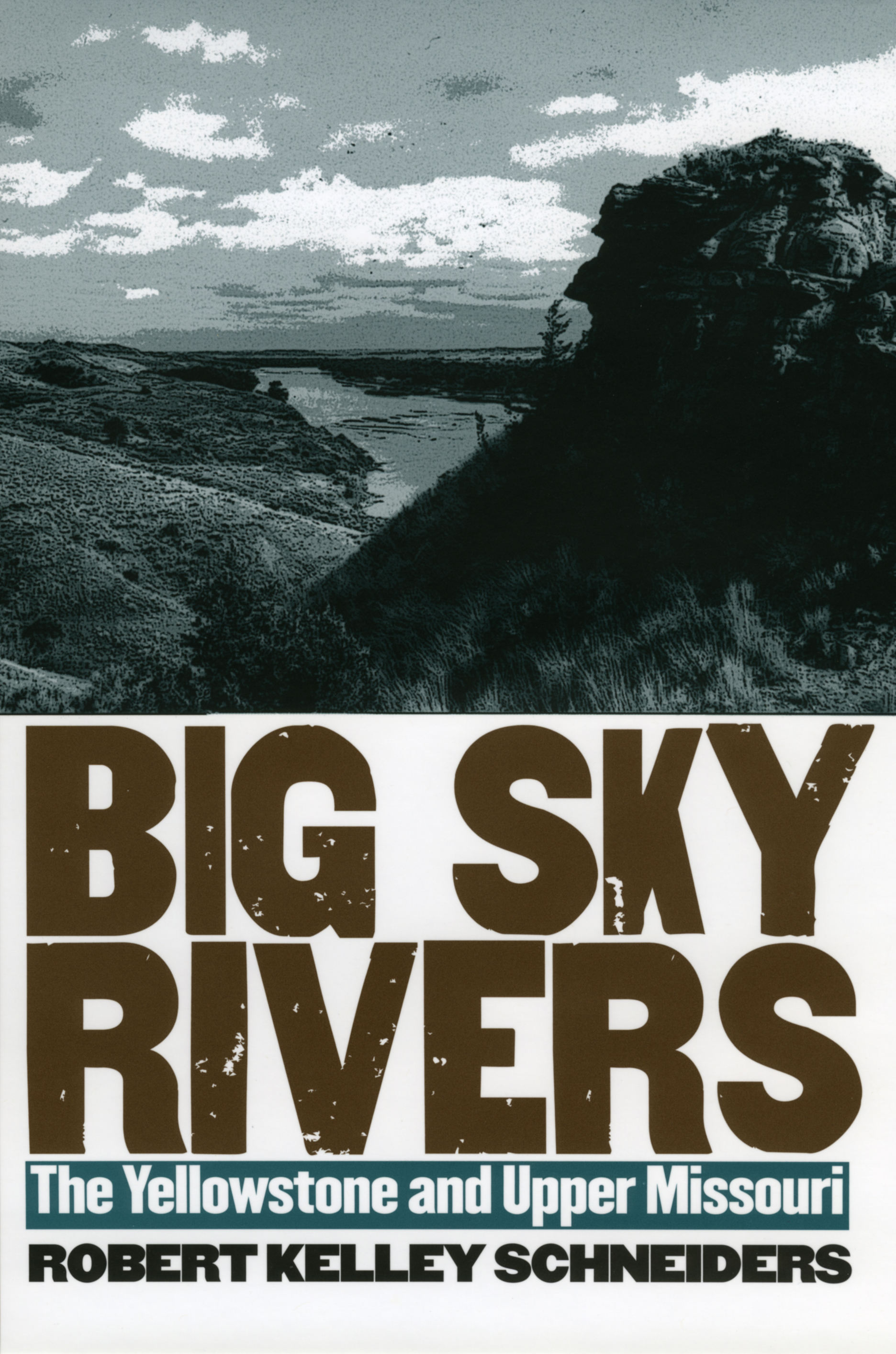 by Daniel Botkin (1999 - 247pp) - A review of the many ecoregions that the Missouri River stitches together in its path from the Rockies to the Mississippi. The author has several books tying together Missouri River history, ecology and Lewis and Clark, including "Our Natural History - The Lessons of Lewis and Clark" and "Beyond the Stony Mountains - Nature in the American West from Lewis and Clark to Today"

by Brett Dufur, Brian Beatty and Maggie Riesenmy (2008 - 192 pages) - Know the nature around you. The Katy Trail follows the Missouri River valley from Boonville to St. Charles.

“Prairie: Revised Edition - A Natural History of the Heart of North America”

By Candace Savage (2004 - 336pp) - A guide to the ecology of this endangered ecosystem that forms the heart of the Missouri River watershed. 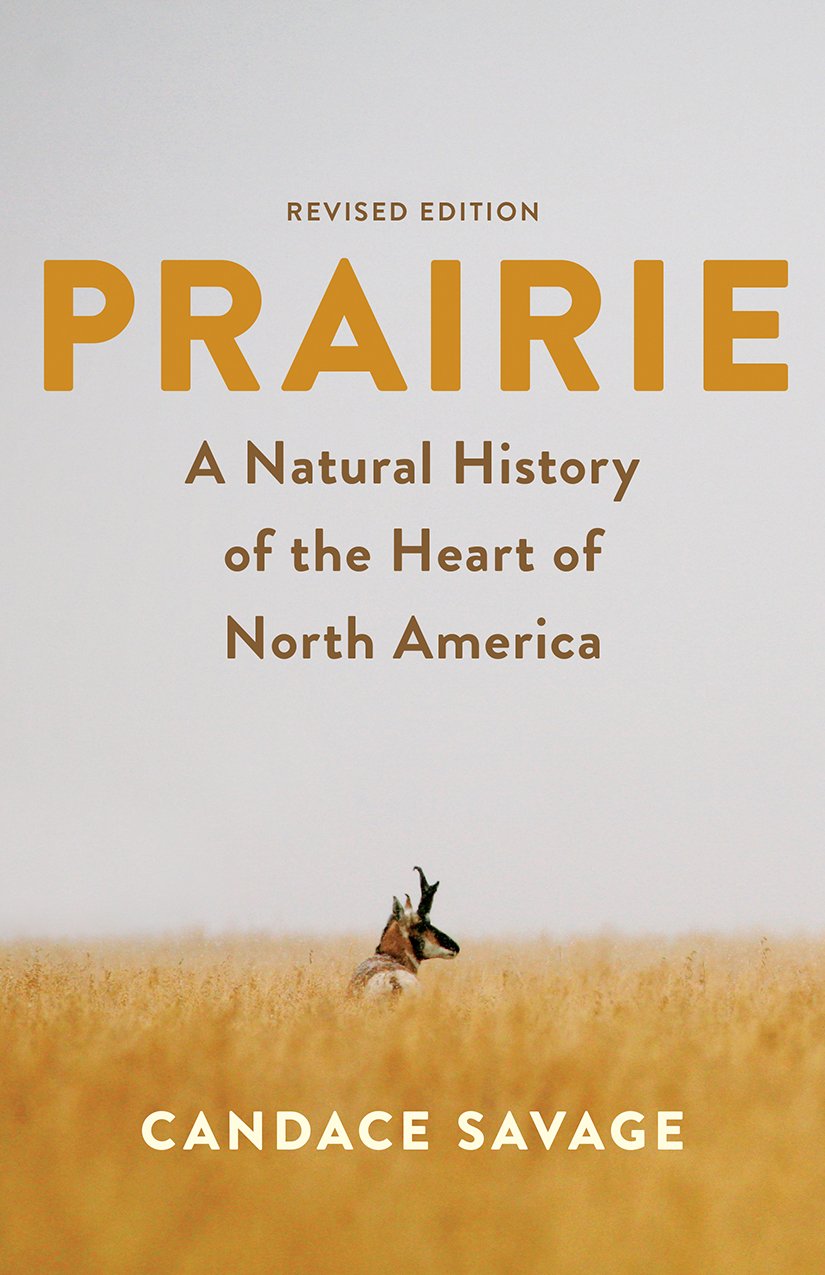 "From the Bottom Up - One Man's Crusade to Cleanup America's Rivers"

by Chad Pregracke and Jeff Barrow (2007 - 301pp) - The story of Chad Pregracke, founder of Living Lands & Waters, and his adventures cleaning up the Mississippi River and beyond.  Includes the story of Missouri River Relief's founding.

“At the Confluence: Rivers, Floods and Water Quality in the St. Louis Region” 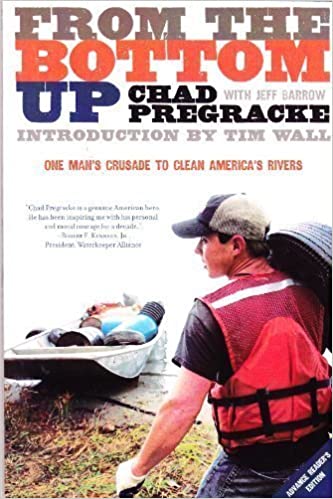 by Andrew Reeves - (2019 - 384pp) - The first complete history of the lastest invasion of carp in North America, and what is being done to mitigate the damage and stop their movement.

by Amahia K. Mallea (2018 – 358pp) – Kansas City’s ambivalent history with the river that created the city. 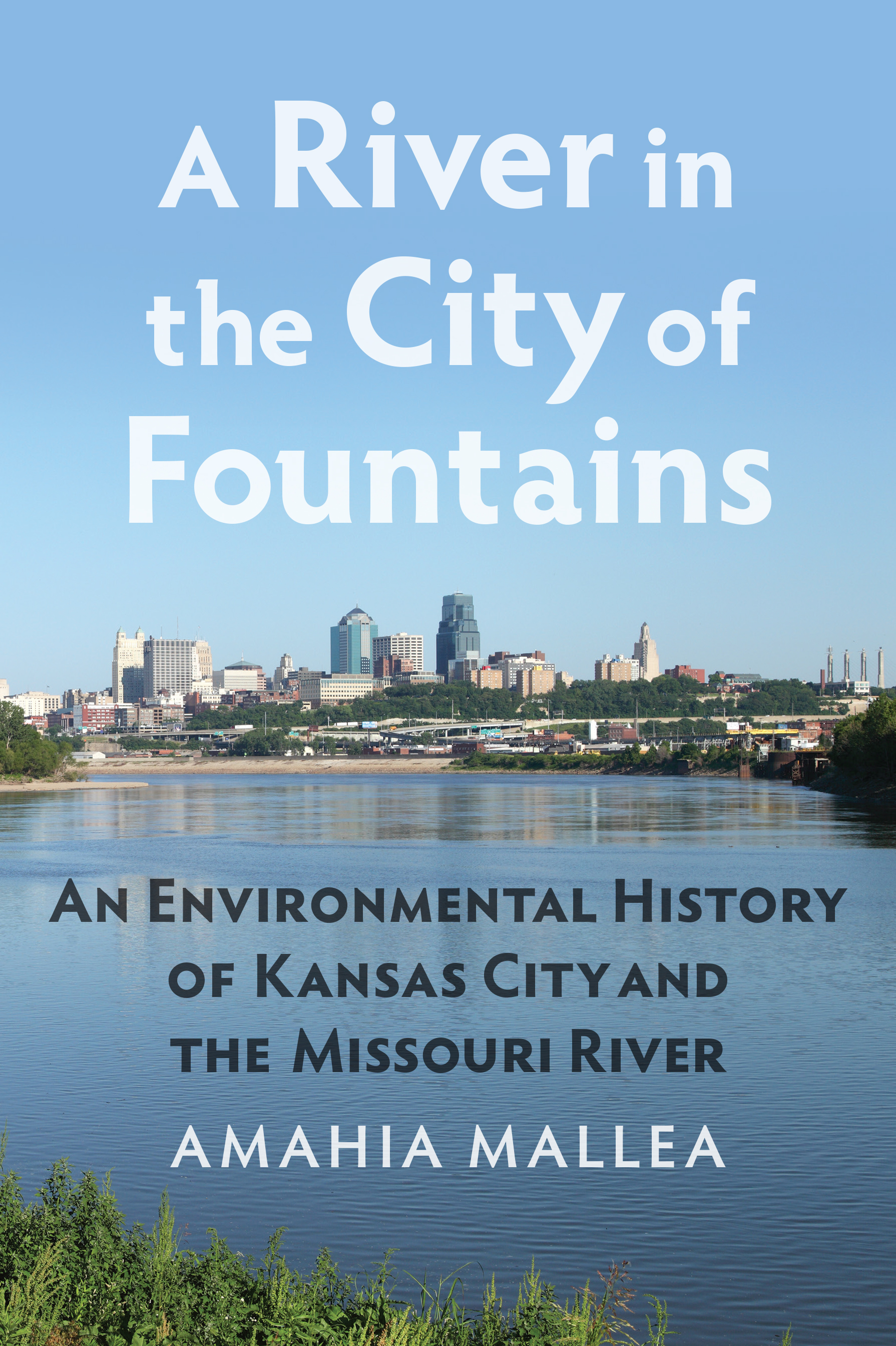 “Water 4.0 – The Past, Present, and Future of the World’s Most Vital Resource”

by David Sedlak (2014 – 332pp) – The little-known story of the systems that bring us our drinking water, how they were developed, the problems they are facing, and how they will be reinvented in the near future. Not about the Missouri River but essential reading. 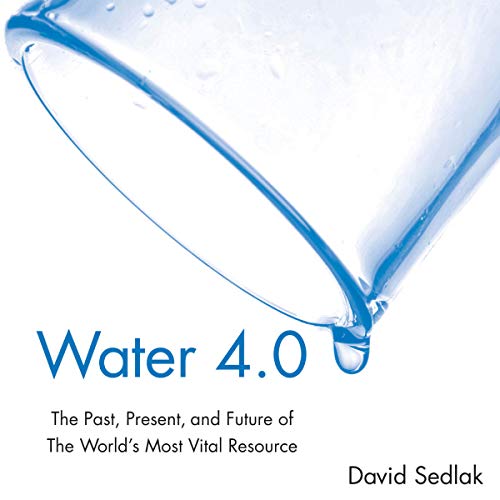 This is a huge category we have barely scratched the surface of. There are so many local, regional and riverwide histories out there. Here's a beginning. If you have suggestions, email Steve.

by Stephen Ambrose (1997 – 592 pp) – A historical retelling of the Corps of Discovery expedition led by Lewis and Clark.

“Journal of a Voyage up the Missouri River in 1811”

“Across the Wide Missouri”

"The Lewis and Clark Expedition Day by Day"

by Gary Moulton (2018 - 774pp) - Transcriptions of the explorer journals arranged by date and location.

"Travels in North America, 1832-1834: A Concise Edition of the Journals of Prince Maximilian of Wied"

by Prince Alexander Philipp Maximilian of Wied, Marsha V. Gallagher (Editor) (2018 - 624pp) - This German prince took one of the first steamboats to travel to the Upper Missouri River in 1832-34, accompanied by artist Karl Bodmer.

by Karl Bodmer & Marsha V. Gallagher. (1984 - 376pp) - Color and black and white prints of Karl Bodmer's art collected during his voyage up the Missouri River in 1832-34 with Prince Maximilian of Wied.

by John M. Barry (1998 - 528pp) - A classic of American history. Focused more on the Mississippi River, but this is an essential volume for understanding the history of river management in the U.S. so we can hopefully learn from the mistakes of the past. The book is much broader than just river management, really painting a portrait for how important this flood was in the overall history of the nation. 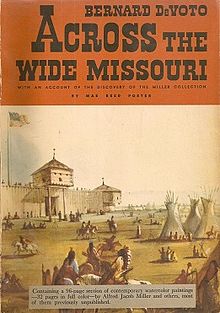 “The River and I”

John G. Neihardt (1910 – 325pp) - The author retells the story of his boating adventure on the pre-dammed Missouri River.

by Brett Dufur (2004 - 256pp) - A travel guide to the history, natural features, culture of the Lower Missouri River valley.

“The Complete Paddler - A Guidebook for Paddling the Missouri River from the Headwaters to St. Louis, Missouri”

by David L. Miller (2005 – 380 pp.) – Mile by Mile paddler’s guide to the Missouri River from Three Forks, MT, to St. Louis, MO. (unfortunately, this volume is out of print, and can be pretty pricey when you find it online)

"Fighting the Current There and Back"

By Patrick Dobson (2015 - 208pp) – A memoir of an adventure walking to the headwaters of the Missouri River then floating back down.

"On the Big Rivers - From Three Forks, MT, to New Orleans, LA"

by Richard Messer with Jerry D. Sanders - (2015 - 190pp) - In 1962, two friends paddled a canoe the length of the Missouri/Mississippi Rivers, keeping journals of their adventures. 50 years later they turned those journals into an fantastic peek into a former America. Also check out this interview by Missouri River Paddlers founder Norm Miller.

"River Horse - Across America By Boat"

by William Least-Heat Moon - (2001 - 528 pp) - Willam Trogdon and his co-pilot Pilotis boat a C-Dory from the Atlantic to the Pacific, including a trip up the Missouri River.

"Deep River: A Memoir of a Missouri Farm"

by David Hamilton - (2001 - 184pp) - Wandering through the history and natural world of a Saline County Missouri River bottom farm.

"Five Months on the Missouri River Paddling a Dugout Canoe"

By Bob and Louise Lynd; Edited by Henry L. Armstrong - (320pp) - A collection of news reports written while on their journey, this married couple shares a great lifechanging adventure. 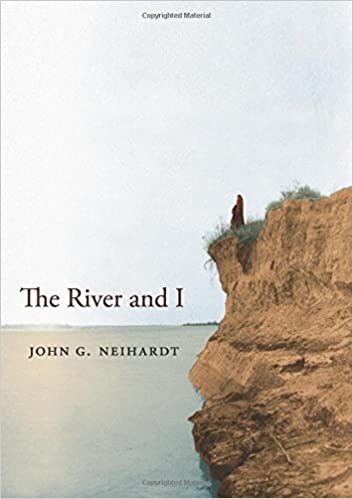 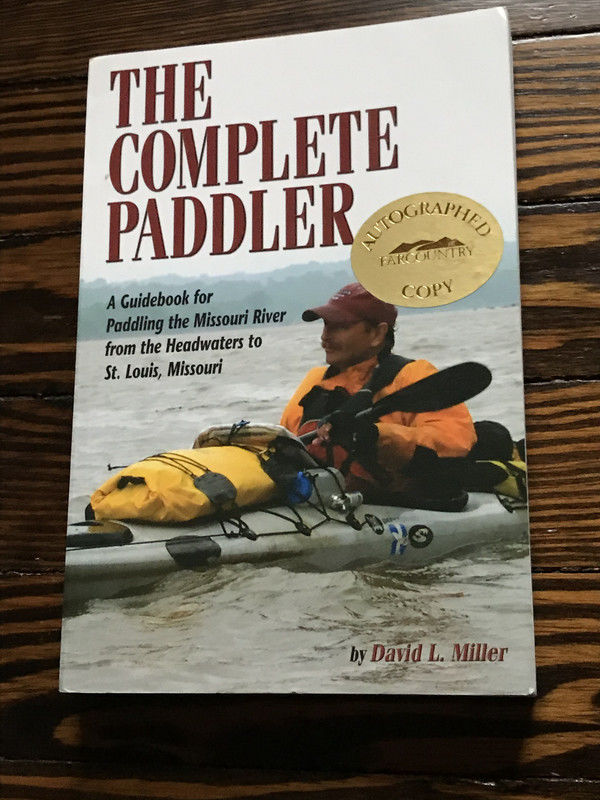 We really need your help here! What excellent books are out there that document the many outstanding tributaries of the Missouri River?

“The Niobrara – A River Running through Time”

by Paul A. Johnsgard (2007 – 375) - A natural history and species catalog of this ancient but always changing Nebraska river.

“Damming the Osage: The Conflicted Story of Lake of the Ozarks and Truman Reservoir”

by Leland and Crystal Payton (2012 – 304 pp) – A deeply researched historical look at the wild political, social and economic forces that completely changed the Osage River. 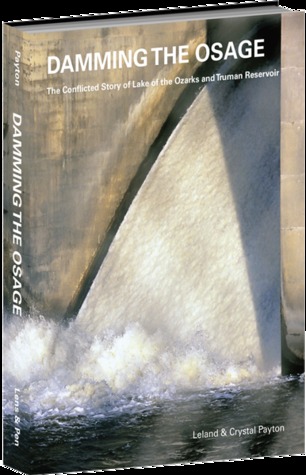 Some of the most revealing river history is in relatively unknown works done by local authors studying their own local history.

by Michael Dickey (2004 - 299pp) - The story of this crossroads of America, where the Boonslick trail met the Santa Fe trail and the steamboat highway upstream.

"New Haven: Its Past & People"

by David Menke (2002 - 210pp) - David Menke has several books about New Haven, MO history including "From Ravensburg County to Miller's Landing" and "New Haven The Early Years" available through the New Haven Preservation Society. Sadly the website for the NHPS doesn't seem to be active anymore, so we are not sure where you can find these books online.

Dorothy Heckmann Shrader was born and raised in Hermann, MO, the daughter of famous "Steamboat Bill" Heckmann, a steamboat pilot and builder and the author of a series of steamboating columns in the Waterways Journal. She published three books compiling her family's unique history on the Missouri River. Each has an introduction by musician and steamboat pilot John Hartford.