These projects were financed mostly by an EPA Environmental  Education grant that closes out this year. HUGE gratitude to EPA and to Jan Weaver from the Missouri Environmental Education Association (MEEA), who wrote the grant proposal.

These mileposts were built upon the groundwork of river clean-ups this year from Omaha-Council Bluffs to Saint Charles, including big events in Washington, MO, and Boonville along with MRR teams helping with clean-ups in Kansas City and the Meramec and Mississippi rivers. 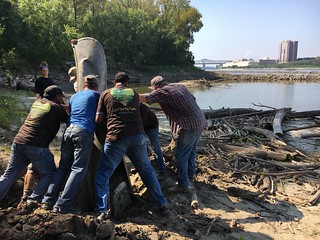 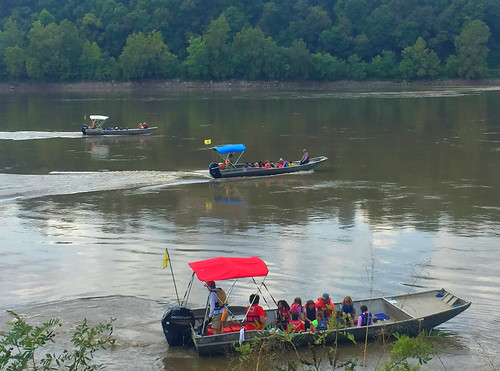 MRR boats and crews continued to run support for four paddling races—the “Spring 12” by Osage Paddle Sports, the “Race for the Rivers” by Greenway Network, the “Missouri American Water MR-340” by RiverMiles and the “Race to the Dome” by Missouri River Relief.

In addition, MRR continues to co-sponsor the monthly Big Muddy Speaker Series, to host the annual Wild & Scenic Film Festival, and conduct outreach by setting up booths for a handful of community events.

MRR stands out as a grassroots, equipment-based, action-oriented group. A compelling part of our story is the volunteer community called the Missouri River Relief Crew - a tight group of dedicated river lovers who travel up-and-down the river; who pitch camp and cook meals; who plan events around a campfire and who celebrate success around the same ring of fire. They are at the heart of everything we accomplish.

Everyone who comes to an MRR on-the-river event becomes part of a trash cleaning team; shares an adventure on the river, and returns with stories to tell and memories to treasure.  We invite you to join this community of people taking action on the river— there are many ways to help and everyone has something to contribute.  Please accept our heart-felt gratitude for your continued support—THANKS!!!